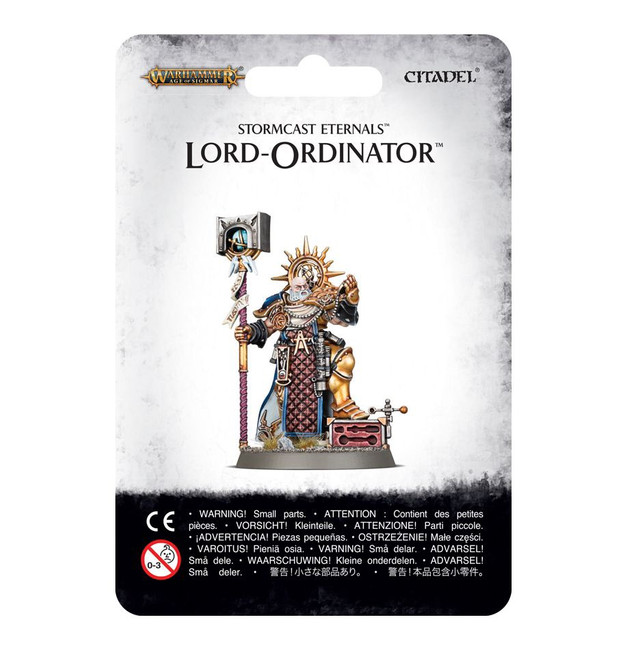 Masters of celestial engineering, the Lord-Ordinators are wise men who have shaped the Mortal Realms through the word of Sigmar and the readings of the heavens. When their sharp and serious minds cannot re-mould reality to their whims, they take up their hammers and march to war, hewing the future with each blow as a master mason shapes the stone of a temple to Sigmar’s glory. Striding to battle in sigmarite armour, Lord-Ordinators wield astral grandhammers that strike with thunderclap force. It is their solemn duty to read the stars above, using the truths there to engineer fate on the battlefield.

This multi-part plastic kit contains the components necessary to build a Lord-Ordinator. He comes clad in impressively ornate sigmarite armour – slightly less than most Stormcast Eternals, as his arms are bare between the gauntlets and his lion-and-hammer-motif shoulder pads. He wears a large textured tabard over his chest plate, which extends to a cloak at the rear, held fast by a belt featuring engineering and siege equipment – guides, measuring devices and a ratchet/wrench mechanism hang from his hips. He is using an open box of tools as a footrest – this box features an anemometer. He wears no helmet – instead, we’re treated to a view of his glorious facial hair. Behind his head is an arcanabulum, and topping off the symbolism nicely is an anvil and pair of callipers on his belt. Weaponry-wise, he holds a huge astral grandhammer in his right hand, with his left hand holding the astrolabe which he is peering at with a stern, quizzical glare..

The Lord-Ordinator comes as 10 components, and is supplied with a Citadel 40mm Round base.

Masters of celestial engineering, the Lord-Ordinators are wise men who have shaped the Mortal Realms

Praetors are soul-bound bodyguards to the lords of the Stormcast Eternals. Having crossed the Anvil

Vigilors are Thunderstrike-armoured advance scouts. Rangers who forge ahead of the main Stormcast Et