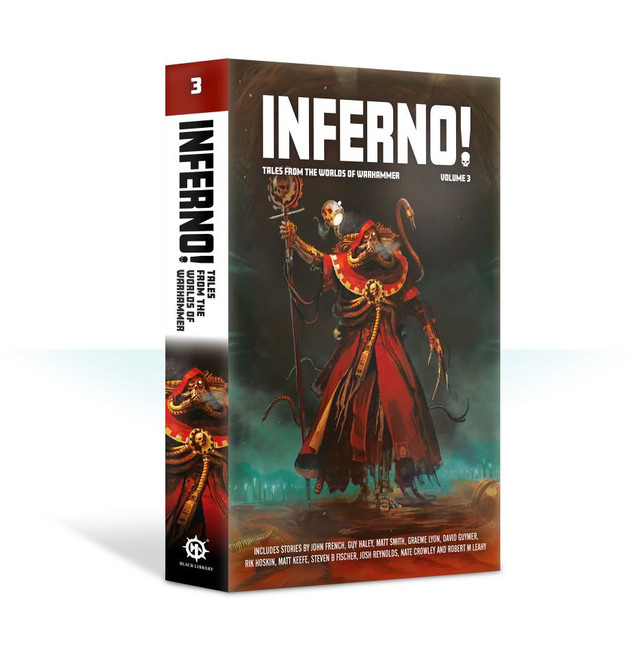 Tales from the Worlds of Warhammer

From the bar of the Brazen Claw where aelven Prince Maesa tells his tale, to the secretive rituals of the Adeptus Mechanicus and a feral Emperor-worshipping tribe, this anthology brings you 11 tales of action and adventure!

READ IT BECAUSE
The latest volume of Warhammer short fiction includes the first-ever Blood Bowl tale to grace Inferno!'s pages, along with a look into the past of one of Inquisitor Covenant's companions, the next part of Guy Haley's Prince Maesa serial and much more besides.

DESCRIPTION
The third volume of the ultimate Warhammer anthology brings more new short fiction from the worlds of the far future and the war-torn Mortal Realms – and, for the first time, from the insane sporting world of Blood Bowl! With eleven tales written by new and established authors, it's an essential collection of stories for all fans of the Warhammer universes.

In this volume, the saga of the storm-wracked Brazen Claw continues as the aelven wanderer Prince Maesa tells his story. In the 41st Millennium, discover the secrets of Magos Glavius 4-Rho and his dealings with a shadowy sect of the machine priesthood, and see what happens when a feral tribe try to rebuild a crashed starship in their image of the Emperor. And when the Talabheim Titans Blood Bowl team face a string of murders, players take it upon themselves to investigate… You'll find all this and more in these 11 action-packed stories, collected together for the first time.

Tales from the Worlds of Warhammer Aelven treasure hunters seek plunder in the Realm of Death, a sin

Tales from the worlds of Warhammer

Tales From the Worlds of Warhammer