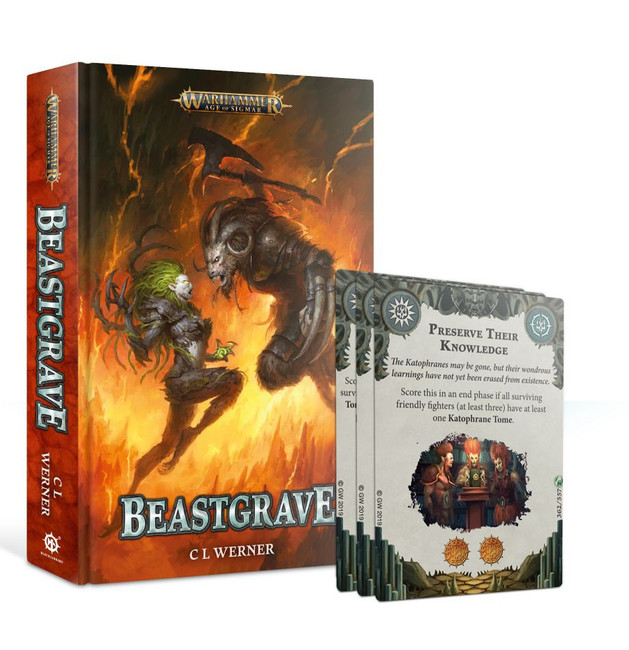 A Warhammer Age of Sigmar Novel

In the untamed wilds of Ghur, darkness is rising. Rival warbands battle over the dread Beastgrave. Will Beastlord Ghroth prevail or can Branchwraith Kyra and her dryads stop his foul plans?

READ IT BECAUSE
The Warhammer Underworlds action is moving to a new arena. This is your chance to discover the secrets of the Beastgrave, and the warbands battling over it.

THE STORY
Ghur is a realm of vast wilds and savage beasts. Few are more vicious than the herdchief, Ghroth the Rootcutter. Brutal and ruthless, he leads his warherd from one massacre to the next, slaughtering all who defy him. Yet this is not enough to sate Ghroth's bloodthirsty ambition – to become the mightiest of beastlords. When a fearsome vision promises Ghroth the power he craves, he leads a small band of warriors far across the wastes to seize the relic that will make all beastkin submit to his dominion.

But Ghroth's ambition is not unopposed. Rivals within his own warherd seek to cheat him of the prize he covets. Meanwhile, in the enchanted forest of Thornwyld, an enemy of a different kind stirs. The Branchwraith Kyra has also had a vision, an apocalyptic foretelling of the destruction Ghroth will unleash upon her home. Gathering a retinue of dryads, Kyra hastens to thwart Ghroth's hunt – either by killing him or destroying the dark relic he seeks.

The trail will lead both beastkin and Sylvaneth across perilous wastelands. But no danger is greater than that which waits in the mountain tomb of the godbeast. It is a place of terror and legend, a place spoken of in frightened whispers. It is a place called Beastgrave.

ABOUT THIS EDITION
The hardback book includes three alternative-art cards to use in Warhammer Underworlds: Beastgrave. The cards are Preserve Their Knowledge, Disdain For Knowledge and Acolyte of the Katophranes. Each card's art includes a character carrying a Black Library novel, making them a fun and thematic variant to show your opponents that you're a fan of Black Library!

Get your deck, models and tokens to your next Grand Clash (or just a game at a friend’s house!) with

Bring the horrifying depths of Beastgrave to life with this set of scenery tiles! Designed to be com

Keep your deck safe from anything Beastgrave (or your bag) can throw at it with this nifty deck box!

Keep your cards and tokens organised in your Warhammer Underworlds games with this playmat! Made fro