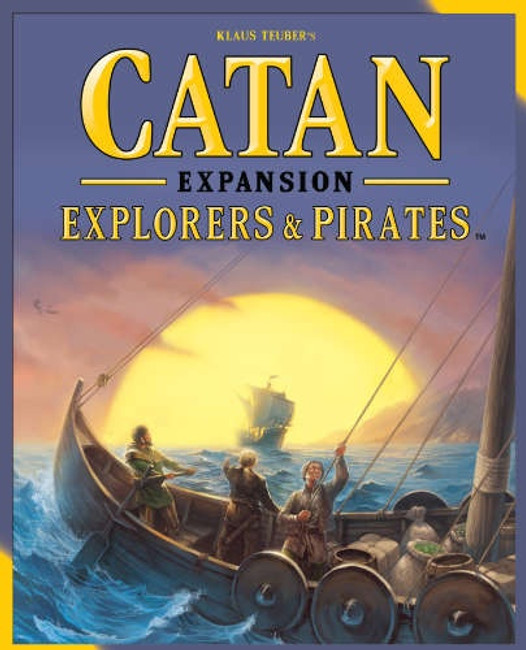 or make 4 interest-free payments of $25.38 NZD fortnightly with

Take your Catan game over the horizon and discover a life of island adventure with Catan: Explorers and Pirates! The five scenarios in this set require you to master not one island but three, and the sea as well! With a wealth of new pieces, rules and options, Klaus Teuber's masterpiece is more compelling than ever! Explore and trade with ships designed to carry settlers, cargo or adventurers. Settle new lands, battle pirates, acquire spices and locate the grand banks of Catanian fish! The Catan: Explorers and Pirates expansion features five scenarios and three missions. Some of the scenarios make use of the missions while others do not, allowing you to mix and match for maximum variety and replayability. Land Ho! Explore the seas of Catan and discover two new islands to expand your settlements. Once you,ve discovered an island, you must use ships to ferry settlers from one island to another and colonize distant lands. (Introductory Scenario) Pirate Lairs! In this scenario pirates prowl the seas along with your trading vessels. Pay tribute to the pirates or drive them off. Then find and capture their lairs to earn gold and Victory Points! (One Mission Scenario) Fish For Catan! The people of Catan are short of food! These are deep water fish though, so first you must find their shoals before you can catch them! The Council of Catan will reward players with Victory Points for returning fish to the island, as well as for capturing pirate lairs. Just watch out for roaming pirates, not only will they demand gold for tribute, they might also get to the fish before you do! (Two Mission Scenario) Spices For Catan! In this scenario the Council of Catan wants you to find fish and spices for the people of Catan! As before, they reward the most industrious merchant captains with victory points. Obtaining spice will require you to become friends with the mysterious inhabitants of the Spice Islands but in return they will not only trade you spices but teach you their knowledge of sailing or even pirate fighting techniques! (Two Mission Scenario) Explorers and Pirates! This lengthy and challenging scenario brings everything from the previous scenarios together! Explore new lands, capture pirate lairs, find fish and befriend the inhabitants of the spice isles! (Three Mission Scenario)

Players are recent immigrants to the newly populated island of Catan. Expand your colony through the

Exit the Game: The Theft on the Mississippi

Exit the Game: The Stormy Flight

Product Description Team spirit, creativity, mystery and speed are in demand at "EXIT - The Game - T

Kiwi's Versus Morality Base Game

THE TOURNAMENT OF POWER BEGINS, WITH SURVIVAL ON THE LINEWith Majin Buu vanquished and Earth returne

Fantasy Flight Games is proud to present the Legend of the Five Rings Roleplaying Game GM Kit!   The

Item Details   This is a set of 250 cards: all the basic Victory, Treasure, and Curse cards from the