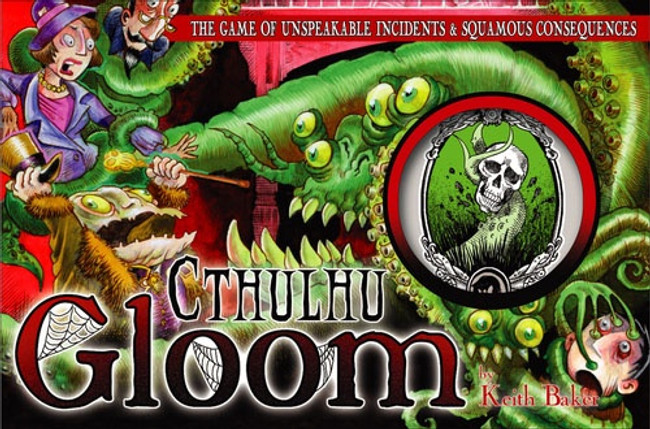 or make 4 interest-free payments of $11.72 NZD fortnightly with

View Details
From Dunwich to Innsmouth, from the halls of Miskatonic University to the Charles Dexter Ward at Arkham Sanitarium, trouble is in the air. The stars are almost right, and terrors from beyond space and time are beginning to break through. When Cthulhu rises, we're all doomed -- but whose downfall will be the most entertaining?
In Cthulhu Gloom, you control a group of Lovecraftian protagonists and guide them down a path of horror and madness to an untimely death, while keeping your opponents happy, healthy, and annoyingly alive. While your characters Gibber With Ghouls and Learn Loathsome Lore to earn negative points, you'll encourage your opponents to be Analyzed by Alienists and to Just Forget About the Fungus to pile on positive points. When one group finally falls prey to the interdimensional doom that awaits us all, the player whose characters have suffered the most wins.
Cthulhu Gloom is printed on transparent plastic cards. Multiple Modifier cards can be played on top of the same Character card; since the cards are transparent, elements from previously played Modifier cards either show through or are obscured by those played above them. You can immediately and easily see the point value of every character, no matter how many Modifiers they have piled on.
Cthulhu Gloom is a stand-alone card game that's also fully compatible with Gloom and its expansions. It introduces Story cards and Transformation cards.
One or more Story cards can be placed face up on the table at the start of the game; the first player to meet the conditions of a card -- drawing the attention of The King in Yellow or heeding The Call of Cthulhu, for example -- can claim it and gain the benefits it lists.
Transformation cards have ongoing effects that remain with a character throughout his life, along with a picture that replaces the character's original art with something hideous and slimy; when you've Felt Rather Fishy or been Minced by Mi-Go, the squamous results aren't easily forgotten!
2-5 players. 60 minutes playing time.
×

From the frozen lands of the Snark to the torrid intrigues of the Bannisters, there is one tru

A bluffing deduction game for everyone.   Each round involves two missions, depending on whether you

Product Description Welcome to Escape Room The Game by Identity Games. Feel the thrill and enjoy the

The Crew: The Quest for Planet Nine

Product Description In the co-operative trick-taking game The Crew: The Quest for Planet Nine, the p

Description The perfect Starter Paint set for any wargaming system. All the base colours you

Rivals for Catan: Deluxe puts you in charge of one of the two factions developing newly-settled Cata

This pack contains 26 cards with which to expand your games of Necromunda, and can be used to repres