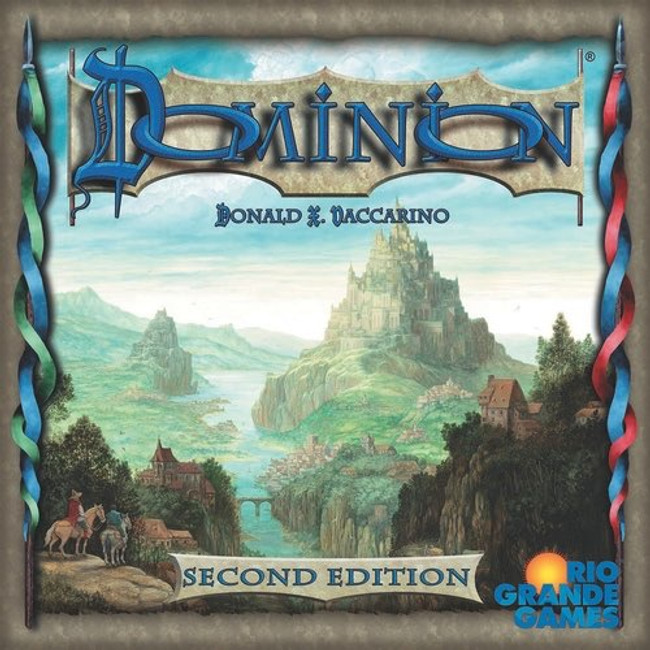 or make 4 interest-free payments of $22.48 NZD fortnightly with

You are a monarch, like your parents before you, a ruler of a small pleasant kingdom of rivers and evergreens. Unlike your parents, however, you have hopes and dreams! You want a bigger and more pleasant kingdom, with more rivers and a wider variety of trees. You want a Dominion! In all directions lie fiefs, freeholds, and feodums. All are small bits of land, controlled by petty lords and verging on anarchy. You will bring civilization to these people, uniting them under your banner.

Dominion (Second Edition) replaces six Kingdom card types from the first edition with six new types of Kingdom cards, while also replacing the blank cards in the game with a seventh new Kingdom card. These new cards are available on their own in the Dominion: Update Pack. The rulebook has been rewritten, three cards have mild functional changes ("you may" added to Moneylender, Mine, Throne Room), and other cards have been rephrased (while remaining functionally the same).

The Game of Inauspicious Incidents and Grave Consequences  The world of

Something’s afoot. The steward smiles at you like he has a secret, or like he thinks you have a secr

Prince John is coming to Nottingham! Players, in the role of merchants, see this as an opportunity t

Product Description     Burgle your way to adventure in the deck-building board game Clank! Sneak in

Product Description Legend of the Five Rings: The Card Game is a player-influenced Living Card Game®

Product Description   Reiner Knizia has made a legacy game.  Yes you read that right! My City is a c