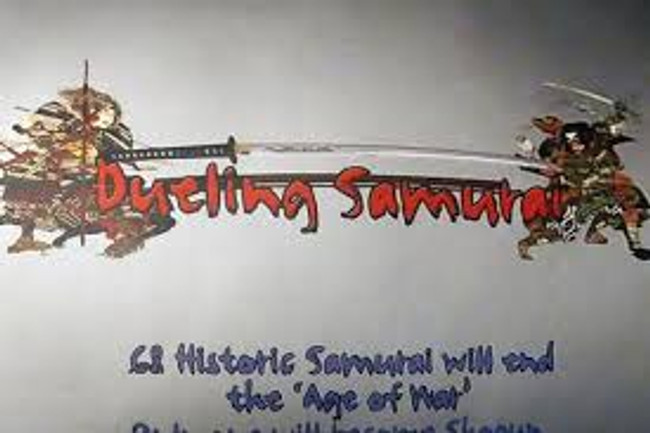 or make 4 interest-free payments of $37.48 NZD fortnightly with

Dueling Samurai – recreate the end of the Age of War in feudal Japan. 68 historic samurai square off in a battle royal of epic dueling, heart pounding action. Immerse yourself in a world of combat, diplomacy, spying, culture… only those who also wage peace will become Shogun. Natural disasters sweep the lands as the blood from duels is spilled upon: Typhoon, Earthquakes, Tsunami, Volcano explosions… disease and flooding all get in the way of your plans to conquer.

48 historical samurai warlords are dealt to all players. These warlords are the clan leaders of specific territories. Each have characteristics that are based on history. Players, in secret, choose a castle territory. When all players choose their castle territory players place their castle into their castle territory. Clan tokens are placed in territories owned. Players who wish to make certain warlords strong will stack clan tokens into these warlords. Clan tokens represent both 1000 samurai and 1 HP for that character. Players make 3 actions in turn. This happens twice which represents 1 decade or 1 round of play. Players draw cards and get Clan Token bonuses after each half decade. The object of the game is to destroy all enemy castles. If your castle remains standing you win. Or, Dueling Samurai has a points scoring system that lets players end the game at the end of any half decade. This being a tested tournament game, the points scoring system is easy to follow and very well developed.