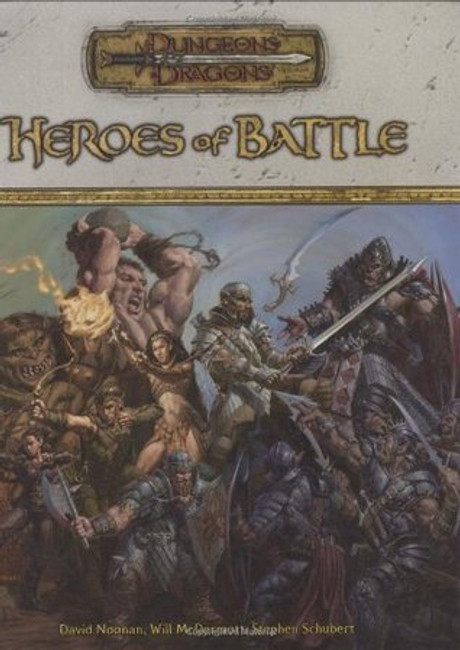 Heroes of Battle provides everything one needs to know to play a battle-oriented D&D campaign. Players can build military characters with new
feats, spells, uses for traditional spells, and prestige classes. Information is
given on tools specific to the battlefield, including siege engines, weapons,
magic items, steeds, and other exotic mounts. Battlefield terrain aspects are
discussed with plenty of illustrative maps and new rules. Specific types of
battlefield encounters are discussed in detail, and the book provides specific
detail on designing battlefields.

DAVID NOONAN is an RPG designer/developer at Wizards of the Coast, Inc. Recent credits include authoring Complete Divine and co-authoring
Races of Stone and Unearthed Arcana .

WILL McDERMOTT, former editor-inchief of Duelist and TopDeck magazines,
has written a number of articles for DragonÂ® Magazine, but is known
primarily for his fiction in the Magic: The Gathering universe, including
the novels Judgment and The Moons of Mirrodin.

STEPHEN SCHUBERT is a freelance writer whose previous credits include
articles in Dragon Magazine.

Masters of fire and earth. Lords of air and water. This tome is the definitive sourcebook for creati