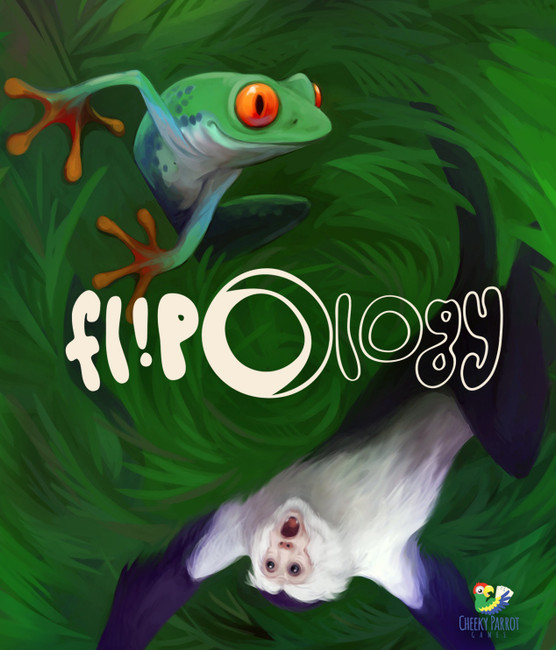 Enter the fantastical Flipp Forest, where 26 different animals from all over the world have come together, in our new game for 2-8 players, age 6+.

Invented by first-time designer Rachel Reilly of Albany, New York, the object of Flipology is to score the most points by flipping over cards. Players are dealt nine cards and select seven to keep and arrange facedown in a row. In addition to the animals, there are also a few cards with environmental elements like rain or wind. The cards have a point value and most also have an active effect. Cards that allow players to flip additional cards are especially helpful because players have just three turns to try to flip over and score as many of their cards as possible.

However, several cards turn the usual order on its head. The ends of opponents’ rows are considered adjacent, so opponents can use cards like the dog, monkey, or frog to flip a card in your row. Even worse, the hawk can swoop in and flip any of your cards, whereever it is positioned in your row. There are also a few grumpy and sleepy animals that will score negatively if they end the game faceup.  And finally, the moon, if faceup in any player’s row at the end of the game, means victory will belong to the lowest-scoring player.

We were delighted to work again with Weta artist Tim Kings-Lynne (our Hoard artist and co-designer), who has rendered the animals and other artwork beautifully:

Once players have mastered the basic game, they can try the Great Tree variant for 2-4 players, in which players get one row of five cards and two turns, then another row on top of that with two turns, and a final row with two turns. In this variant, a card like the frog or hawk from your active row is able to reach down to flip a card in an earlier row.

Was produced for the American market by The DeLorean Motor Company in Belfast, Northern Ireland from

Quiddler, the short word, game – is a breakthrough in word games. Because short words, like ‘at’, ‘