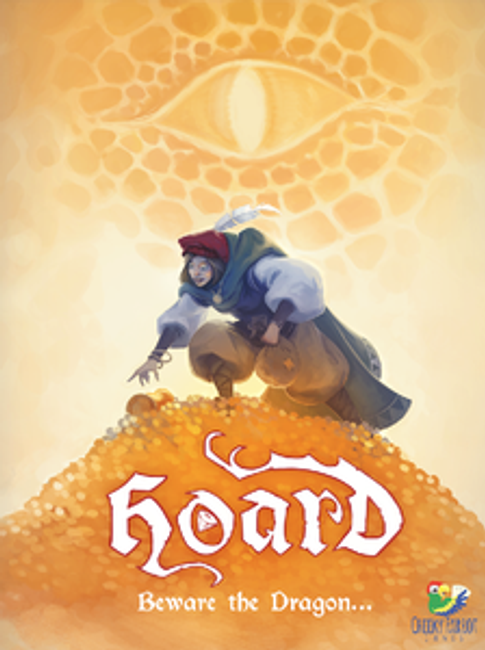 or make 4 interest-free payments of $6.35 NZD fortnightly with

Can you gather and secure more treasure than your fellow-adventurers from the Hoard of the sleeping dragon? Can you defend yourself from their attacks and perhaps perpetrate a few of your own? And can you end the hunt at the most opportune time, perhaps by actually wakening the fearsome beast?

Hoard is a dynamic game of hand management, set collection, and press-your-luck. Each turn players take one of four possible actions: 1) roll a custom die and move to take a new card, 2) secure a set of treasures or add to an existing set to score points, 3) affect the dragon, who wakes in stages from his tail to his head, by playing cards that soothe or rouse him, or 4) use a sword on an opponent or capture a used sword with a shield. The board is composed of 12 facedown cards surrounding the dragon. It changes as players remove and replace the cards. Dice rolls between 1-5 enable clockwise or counterclockwise movement and the special symbol allows access to all but one of the cards, so it is a game that rewards memory.

Hoard is meant to be played in rounds, with scoring tokens obviating the need for pencil and paper scorekeeping.

A limited run of Hoard was self-published by Tim Kings-Lynne and Beck Veitch in 2014. They entered into an agreement with Cheeky Parrot Games in order to improve the game play and get Hoard re-published and more widely distributed. Hoard was successfully funded on Kickstarter in mid-2016. The Kickstarted version with deluxe features released into the New Zealand and Australian markets in Q4 2016. A North American edition is now available in that market.

Tyranny of Dragons: Hoard of the Dragon Queen

Product Description     Burgle your way to adventure in the deck-building board game Clank! Sneak in