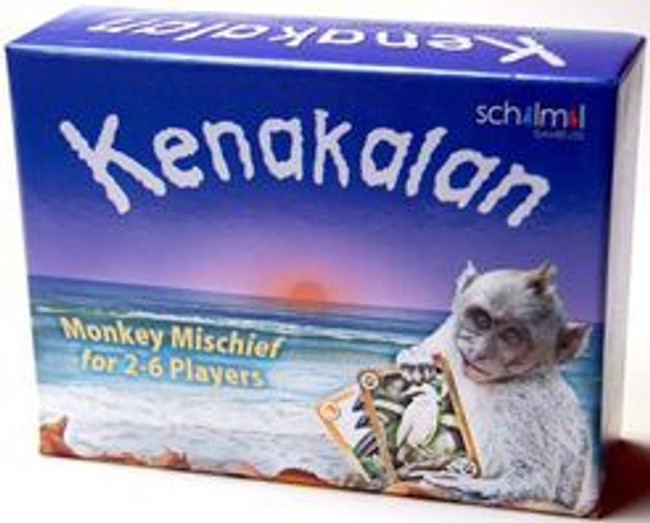 or make 4 interest-free payments of $5.47 NZD fortnightly with

Kenakalan is a unique set collection family game. It features themed tour cards showing photographs of Bali, wild cards and wise and wicked monkey cards. Kenakalan means 'mischief' in Indonesian. There are 98 cards total. The number of cards in play is adjusted to suit the number of players. Play time is between 15 and 30 minutes.

Each player has a different-colored shop front on which to collect finished sets (tours). The tours must be different in number and theme. The first player to complete all of their sets is the winner.

Players can take one action during their turn. At the beginning of the game, their choices are rearranging or taking cards from a central display of five cards or taking the top card off the deck. Finished sets can be laid down at the end of a player’s turn. As the game progresses, players can use their action to pick up a completed tour. On a subsequent turn they can lay it back down with additional cards to increase the size of that tour.

Wise monkeys, drawn from the deck, allow players to take two different actions in their turn, such as rearranging and then taking from the display. Wise monkeys can be used immediately or kept for a more convenient time. Wicked monkeys can also appear from the deck but cause immediate havoc, for example by stealing a wild card from a player’s shop front. Holding fewer cards protects players from certain wicked monkey effects, in which case the monkey is passed to the first eligible player. However, to win you often have to take the risk of holding a large hand.

A Warhammer 40,000 NovelIn a brief respite between wars, Gaunt's Ghosts find themselves facing a hid