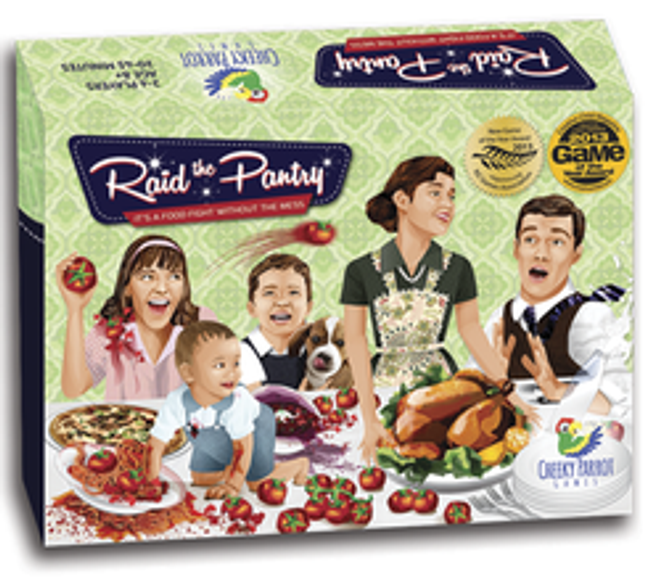 In the cooking-themed card game Raid the Pantry, for 2-4 individuals or two teams of two, players are dealt ingredient and dish cards at the start of play; over the course of the game, players need to collect the ingredients needed to make the dishes in hand. Each completed dish scores you 1-3 points, locks in its ingredients for reuse in other dishes, and allows you to take a new dish card. Action cards, drawn at the beginning of a turn, provide ways to add, lose, trade and retrieve ingredient cards. The eight "Instant Dishes" among the action cards allow players to lock in a common ingredient and score 1 point.

Players can score a "cuisine bonus" for making multiple dishes from one of the five primary cuisines featured on dish cards (American, Continental, French, Italian and Mexican). The first player to reach a point threshold, which depends on the number of players, wins.

In the team version, players end the round and total their points when the Action card deck has been exhausted.

Originally published by SchilMil Games in May 2012, Cheeky Parrot Games acquired the title in 2014 and released a second edition, with some graphical and gameplay tweaks, in June 2015.

2-5 PlayersAges 12+In Raiders of the North Sea: Fields of Fame, enemy jarls have joined forces to he

Raiders are the favoured transports of the Drukhari. Bladed skycraft, they are lightweight and extre

Bananagrams is a Scrabble-like game without the board that's much like Pick Two!, but without the le

Dead of Winter is a meta-cooperative psychological survival game. This means players are working tog

What do you Meme? Basic Bitch pack

What do you Meme? Fresh Memes Expansion pack 1