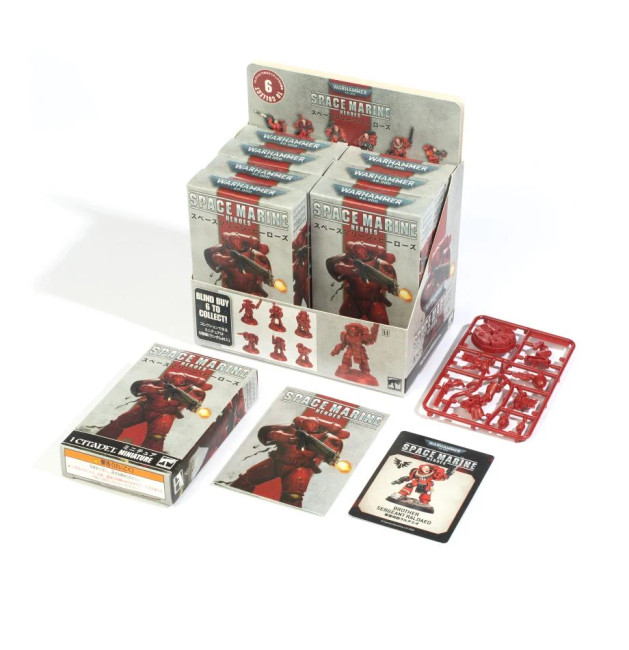 or make 4 interest-free payments of $4.00 NZD fortnightly with

Space Marines are superhuman warriors, appointed by the Emperor to defend his vast Imperium. Clad in mighty power armour and armed with devastating weapons, they stand steadfast in the face of a galaxy full of terrifying foes.

The Blood Angels are among the greatest of the Space Marine Chapters. They are heroes whose angelic features and finely decorated armour hide a dark secret that may one day overwhelm them, and drive them to madness.

Each Space Marine Heroes miniature is a multipart plastic model, cast in red plastic and supplied with a textured rubble base. These kits are push-fit and push off the frame – so no glue or clippers are required to assemble them. Each has a single unique pose, and can be assembled with your choice of a bare head or helmet. These miniatures are supplied unpainted and require assembly – we recommend using Citadel Colour paints.

This is a set of 20 six-sided 16mm dice, in a variety of colours that represent the blood angels. De

The Blood Angels stand apart from the other Chapters of the Adeptus Astartes, descending from the s

Red Fury Book 3 of the Blood Angels seriesWith tempers flaring, and mutants running wild, can the B

The Sanguinary Guard are the utmost elite of the Blood Angels chapter. They fight with wrist-mounted

The Furioso Dreadnought is death incarnate, a towering war machine whose fearsome weaponry is guided

This brass puzzle was first introduced to me by Prague’s own, Professor Bakalar.I borrowed it in Atl

The angular design restricts piece movement. Although the piece has many corners, it slips out easil