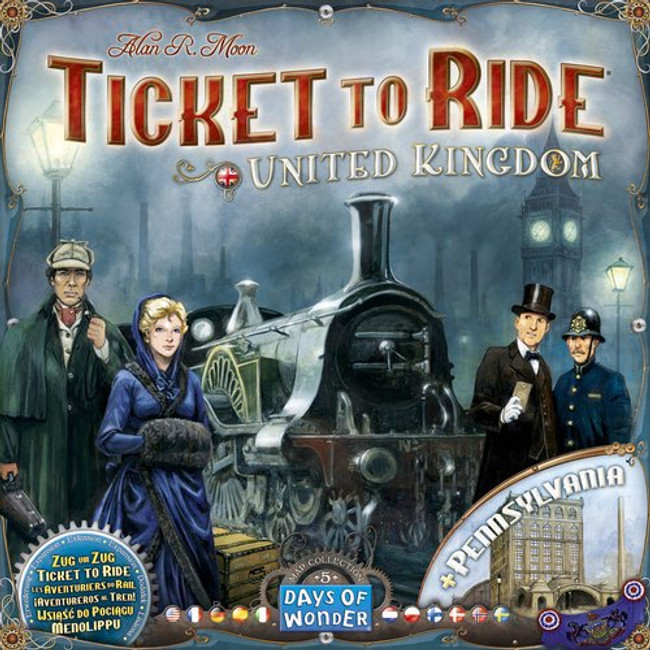 Place the first rails of the glorious train adventure that all started in the United Kingdom of Great Britain and Ireland in the 19th century. Learn to master the power of steam to build trains that go faster and farther, develop your technologies, and reach the far cities of Scotland and Ireland before your opponents!

The United Kingdom map comes with a complete new Train cards deck including additional Locomotives, and Technology cards such as the Mechanical Stoker or the Thermocompressor that will allow players to develop their Technology level and build faster trains and claim long routes.
Also includes the Pennsylvania map - in a state full of railroad history, invest in the most profitable companies to develop your rail network. But do not let your opponents outbid you, or you risk losing the benefits of your investments!
The Pennsylvania map comes with 60 "Stock Shares" cards representing the great railroad companies of Pennsylvania. On this map, claiming a route also allows a player to invest in a company - having a majority of shares in
×

Ticket to Ride: Rails and Sails

The world is changing fast. All over the world, railroad tracks bridge countries and continents, and

Turn of the century Germany... Through a fine autumn rain, a plume of smoke announces the arrival of

Ticket to Ride: Rails and Sails

The world is changing fast. All over the world, railroad tracks bridge countries and continents, and

Ticket to Ride: Heart of Africa

1-6 PlayersAges 12+When visiting the North of Britannia in 122 AD, the Roman Emperor Hadrian Augustu

Bananagrams is a Scrabble-like game without the board that's much like Pick Two!, but without the le

As a wealthy Renaissance merchant, acquire mines and transportation, hire artisans and woo the nobil