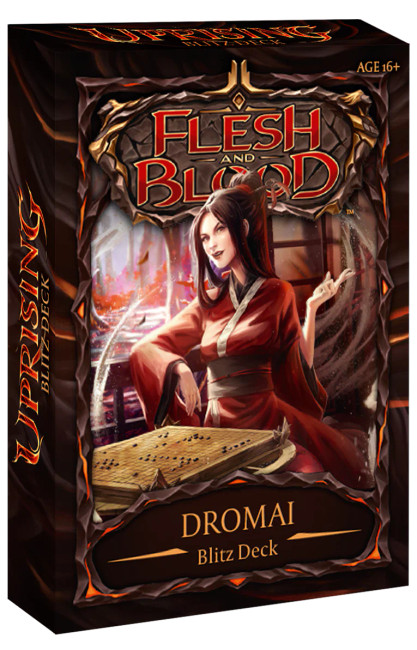 or make 4 interest-free payments of $4.97 NZD fortnightly with

Dromai, an Imperial Illusionist able to conjure the legendary dragons of Volcor out of aether and ash faces off against Fai, a hot-headed Ninja who spearheads the Uprising against the draconian oppression of the Imperials.

Ready-to-play out of the box, Uprising Blitz Decks are designed as a fun and fast way to play Flesh and Blood, ideal for kitchen table gaming. Each Blitz Deck includes a rainbow foil hero card, a beautiful addition to the collection of new and experienced players alike.

Play as Dromai, a Draconic Illusionist combo control deck. Bide your time amassing ash, then animate it with aether into a horde of Ashwings to set the arena ablaze!

Play as Fai, a Draconic Ninja aggro synergy deck. Sequence your chain links to unleash the Draconic talent and assemble a phoenix rebellion that will rise up to overthrow the opposition! Each Blitz deck contains 40 cards, plus hero, weapon, and equipment cards.

40 cards, plus hero, weapon, and equipment cards, per deck

In Dutch Blitz, each player has her own deck of forty cards, with cards 1-10 in four colors; red and

Release Date 24th September 2021 DESCRIPTION Ready-to-play out of the box, Tales of Aria B

This game has challenged and fascinated players of all ages ever since it was introduced in 1946! It