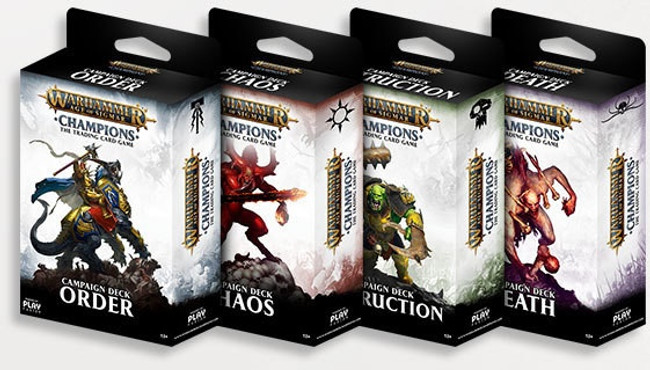 or make 4 interest-free payments of $8.13 NZD fortnightly with

Campaign decks allow those new to the Warhammer Age of Sigmar: Champions universe to quickly field an army and get straight into the action.

There are 4 Campaign decks available each with their own individual playstyles. Each Campaign deck includes 38 cards consisting of 4 champions, 4 blessings and 30 action cards.

An endless stream of green runs wherever the forces of destruction find enemies to crush. Orruks, Grots and vicious beasts flood the battlefield, quickly overwhelming their opponents with the sheer volume of their forces. These ferocious warriors are known to group together to make their attacks even more deadly.

Stalwart and righteous warriors looking to free the Mortal Realms from the clutches of Chaos. The forces of Order are home to Stormcast Eternals and Idoneth Deepkin. Their strength lies in empowering individual units so that they can tear through the opposition while exercising precision board control.

As one by one the Mortal Realms fell to the grip of Chaos one of the Grand Alliances grew ever stronger. For the armies of Death there is no relief. These lost souls remain forever in servitude to their dark masters. Mordants, Vargheists, Spirits and Skeletons fill the ranks of an army that will never know death.

For hundreds of years the zealots of Chaos have torn through the realms looking to destroy all that stands in their way. Leading an army of the Chaos gods’ chosen into battle is a brutal and bloody affair. Relying on self damage and unit sacrifice to unleash their most furious attacks, the gods of Chaos will see blood flowing in abundance.

Novels Fyreslayers A Legends of the Age of Sigmar anthology Across the Mortal Realms, the Fyreslaye

Choose your alliance and use your tactical prowess to build an unstoppable force. Then take to the b

Choose your alliance and use your tactical prowess to build an unstoppable force. Then take to the b

Legends of the Age of Sigmar Omnibus