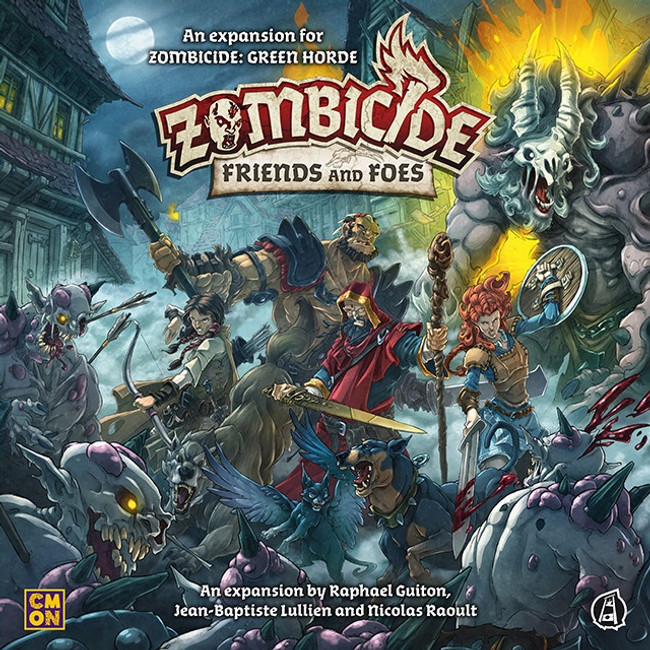 It’s impossible to predict how the zombie plague will affect someone when they’re infected. It quickly mutates, forming all manner of undead monstrosities. One such mutation is the Tainted variety. Covered in nasty spiked growths and with acidic blood, they flail around upon being struck, doing damage to everything nearby. It’s enough to make a survivor go insane. Thankfully, there’s faithful companions that are ready to not only soothe the nerves but also add their claws and fangs to beating back the horde.

The Green Horde: Friends and Foes expansion brings a lot of new material to games of Zombicide. It contains four new survivors, plus their ID cards and new equipment. Tagging along are six new familiars, who can be acquired throughout the game. Their help will be needed to take on the new Tainted Walkers and the hulking Tainted Abomination. There’s also a new 10-scenario adventure pack that utilize five new double-sided terrain tiles.

This is an expansion. The Zombicide: Green Horde core game is required to play.

Zombicide's Compendium #1 is a 92-page book entirely devoted to your favorite game! Inside, you'll f

Wulfsburg is an expansion for the Zombicide: Black Plague board game. Explore new ways to hunt zombi

Orcs and Humans have never had a relationship. The borderlands between the two groups were regular s

Zombicide Green Horde No Rest for the Wicked