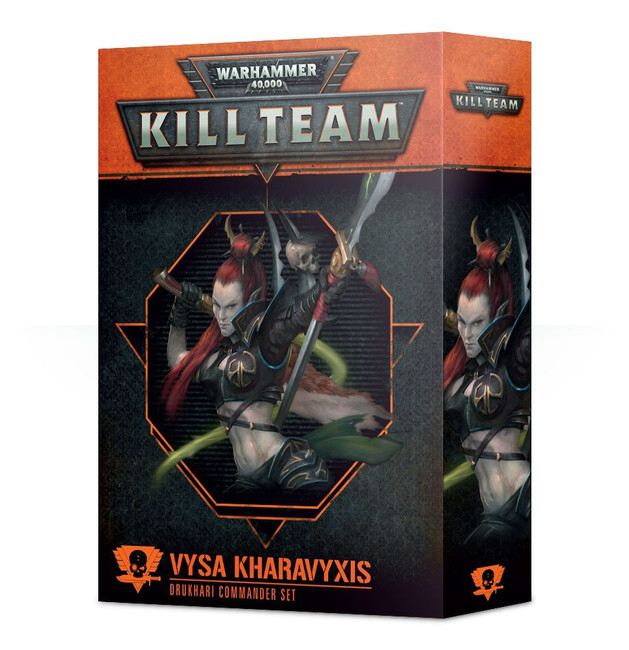 Vysa Kharavyxis was once a favoured champion of the Crucibael, bestowed the rank of Succubus by Lelith Hesperax herself. Gored to death by a tentacled Mortipod in the contests of the Wych Cult of Strife, then resurrected by her flesh-surgeon accomplices, Vysa hunts new beasts and warriors for the arena, refining her duelling technique against them before they can reach the Dark City – and the show begins for real.

Add a Commander – a powerful hero character with unique abilities and rules – to your Drukhari kill team with this set. It contains a multipart plastic Succubus miniature, a set of cards packed with exclusive rules and a sheet of tokens for use in-game:

- A Succubus: this multipart plastic kit is used to represent Vysa Kharavyxis – or the Commander of any Drukhari kill team you wish – fast, elegant and utterly deadly, the Succubus carries an agoniser and archite glaive, with a trophy rack giving an appropriately grisly indicator of her prowess, while her riveted armour features a set of cables which burrow into her neck, delivering doses of powerful combat stims
- A datacard for Vysa Kharavyxis, featuring her characteristics, weapons, abilities and specialisms, along with a card featuring his background
- A card featuring Vysa Kharavyxis’ skill tree – Succubus specialisms which can only be used by that character - 5 Drukhari Commander Tactics Cards, including 2 Tactics exclusive to this set
- A sheet of tokens for use in games of Kill Team – this includes 1 Move/Charge token, 1 Fall Back/Advance token, 1 Ready/Shoot token, 6 Tactic/psychic power tokens, 3 wound tokens, and 3 objective tokens.

Bright and resplendent in gleaming gold, the Adeptus Custodes stride into war with the confidence th