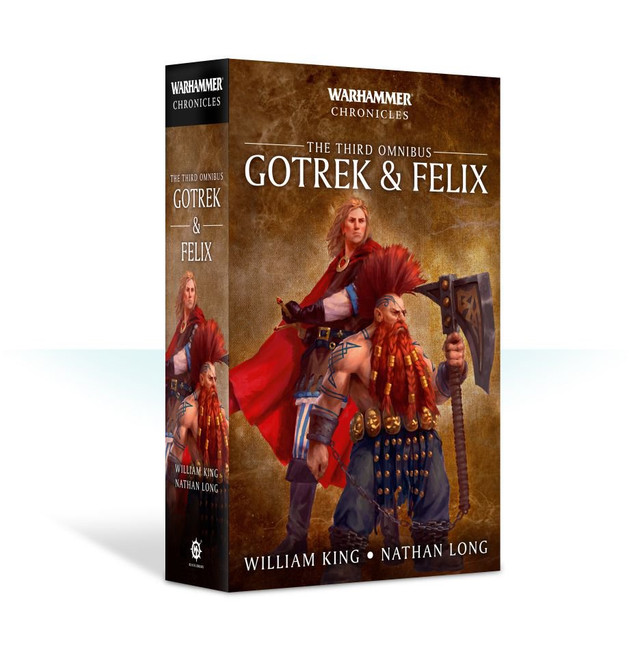 The fan-favourite heroes return for three more novel-length adventures plus a host of shorter tales taking them from mist-shrouded Albion to the far south and beyond.

READ IT BECAUSE
In this omnibus, the torch is passed! Original series writer William King takes his final bow with Gotrek and Nathan Long takes over, changing the focus of the series and embarking on all-new adventures!

DESCRIPTION
Gotrek and Felix: unsung heroes of the Empire, or nothing more than common thieves and murderers?

The truth perhaps lies somewhere in between, and depends entirely upon whom you ask...
Escaping from a horde of enemies, Gotrek and Felix stumble into a network of ancient magical tunnels and emerge on the mist-shrouded isle of Albion, where old foes are hatching a deadly plan. In the far south, the Slayer aids a dwarf prince against the orcs and goblins who have seized his hold. And when they meet their old friend, the dwarf engineer Malakai Makaisson, the heroes uncover a sinister plot to sabotage a dwarf airship and aid the forces of Chaos in their war with the Empire.

A Warhammer Chronicles omnibus In a fourth omnibus of fantasy adventures, the heroic duo of Gotrek a

Release Date 27th August 2022 According to some, Drekki Flynt is the most dashing Arkanaut Captain i