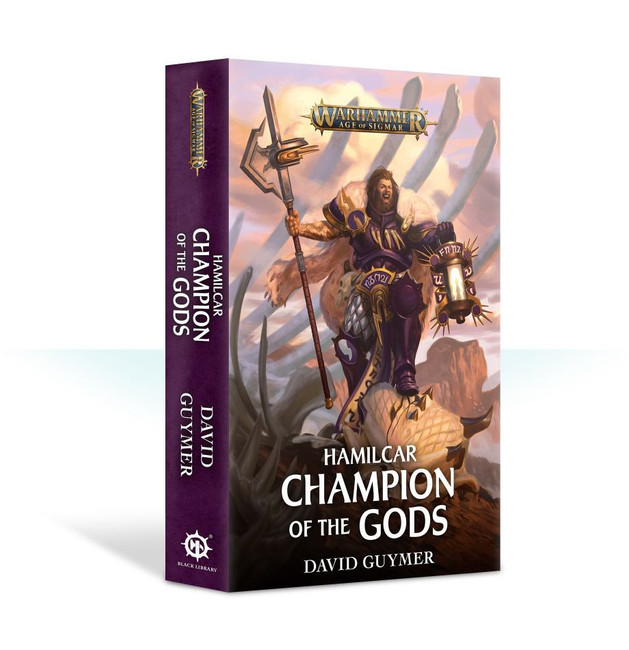 There are few heroes so mighty as Hamilcar Bear-Eater – but when an ancient skaven warlock with a thirst for godhood seeks Hamilcar's immortal soul, will his martial prowess and uncanny skill be enough to ensure survival?

READ IT BECAUSE
Everyone loves Hamilcar Bear-Eater (though few as much as he loves himself), and after loads of short stories, he's now been unleashed in a full-length novel! Enemies of Sigmar everywhere will be quaking in their boots…

THE STORY
Throughout the Realmgate Wars, Sigmar’s centuries long crusade against Chaos in the Mortal Realms, there has never been a hero like Hamilcar Bear-Eater, famed Lord Castellant of the Astral Templars. Would Gardus have charged headlong into the stronghold of Uxor Untamed with a mere handful of warrior at his back? Would Vandus have had the foresight or magnetism to drink himself euphoric, start a war with the Skarabrak lodge, and then wake come morning to a sore head and fifty thousand moonclan berserkers avowed to Sigmar’s cause? No. Only Hamilcar. But when an ancient skaven warlock with a thirst for godhood turns his attention towards Hamilcar’s divine soul, the Bear-Eater knows he will have to call upon his martial prowess and uncanny wits just to survive. Because his next death could be his last.

The Best of Hammer and Bolter vol 2

A Horus Heresy Anthology From the radiation-soaked wastes of Mars to the Space Wolves fleet, and fro

Book One of The KhulOn the Flamescar Plateau, a time of peace and prosperity is threatened by a dist

Blood for the blood god

The Skulltaker is a feared champion of Khorne, a lone warrior of hideous strength and power who kill