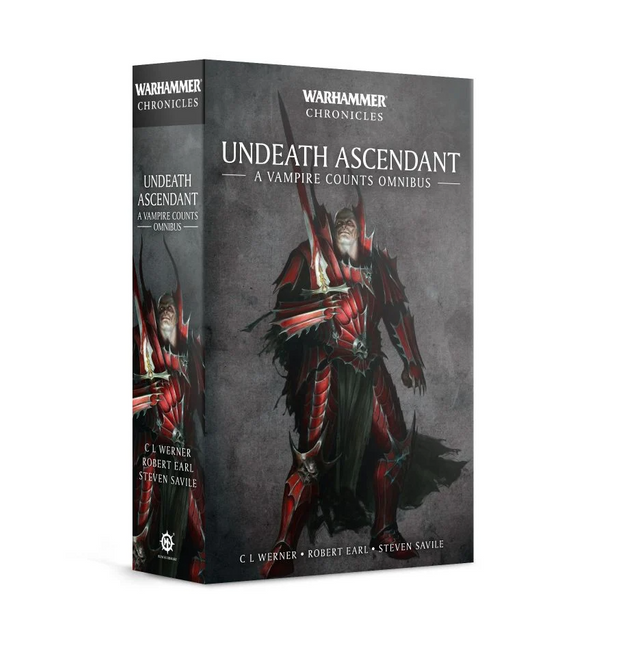 A Warhammer Chronicles omnibusAcross the Old World, brave heroes stand against the dark shadows cast by bloodthirsty vampires. In this collection, three novels and a selection of short stories lay bare the never-ending battle against these lords of the night.READ IT BECAUSEExplore the legacy of Nagash across the world-that-was with a trio of novels focused on the greatest lords of the undead, the bloodthirsty vampires.DESCRIPTIONAncient and cruel, vampires are reviled across the realms of man for their cunning intellect and bloodthirsty pleasures. These quicksilver killers prowl the grim, shaded forests and walled cities of the Old World, slaughtering without mercy, in eternal bondage to a despicable thirst. Only the most valorous heroes of the Empire brave the epic quests to hold back this darkness, and hold it back they must, lest the curse of undeath makes monsters of them all…This omnibus edition collects together three novels and three short stories focused on the dread vampires of the Old World.CONTENTSThe Red Duke by C L WernerAncient Blood by Robert EarlCurse of the Necrarch by Steven SavilePortrait of My Undying Lady by Gordon RennieThe Vampire Hunters by Robert Earl

A Warhammer 40,000 Omnibus Before he was a legend, Commissar Yarrick was already a hero, as you'll d

A Necromunda Omnibus Meet Kal Jerico: rogue, bounty hunter and swashbuckler in the towering urban he