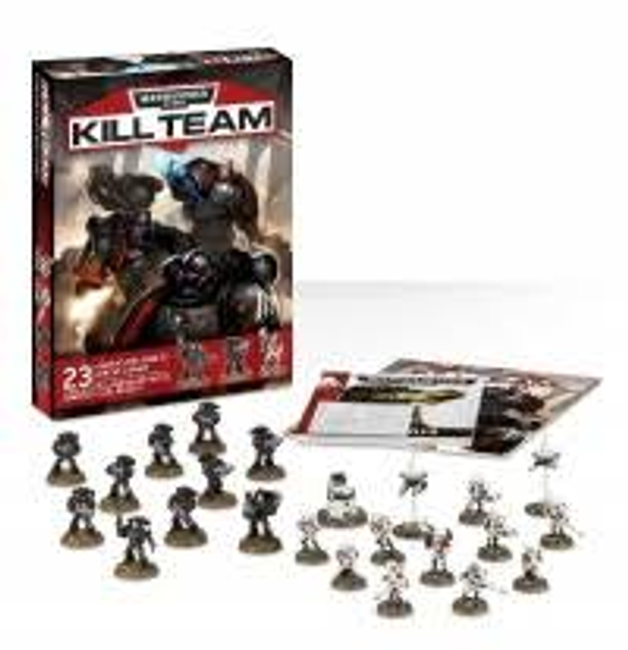 No strength in numbers. No margin for error. Pure, fast-paced combat where tactics matter more than brute strength, and every action matters. A single shot can spell the difference between life and death, and a single decision can decide whether a battle ends in glorious victory or dismal defeat: this is Warhammer 40,000: Kill Team.

A whole new way to play games with your Warhammer 40,000 miniatures, this standalone two-player game puts you in charge of small bands of warriors, and gives you one objective – win, or die.

- a Space Marines Tactical Squad – this is everything needed to build 10 Space Marines with a huge amount of customisation: boltguns, a grav-gun, a melta gun, a flamer and a missile launcher, with power fist, chainsword, plasma pistol and bolt pistol options for a Sergeant.

- a 32-page softback Kill Team book, featuring full rules for playing skirmish missions (six Kill Team missions are included), with an extensive section on additional ideas for your games – making up and linking your own missions as a narrative, playing games with more than two players, introducing vehicles and mobile objectives, co-operating against hordes of enemies; there’s almost limitless scope.

- a small-format softback copy of Warhammer 40,000: The Rules, providing the basic groundwork that Kill Team expands upon.

An absolute colossus of a machine, piloted by graduates of the Ves'oni'Vash, the KV128 Stormsurge is