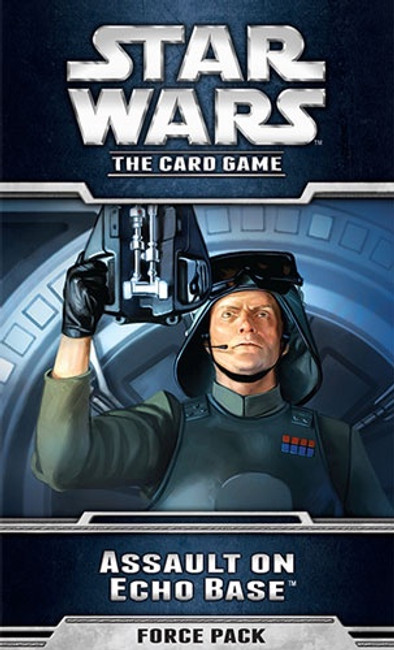 "I've reached the main power generators. The shield will be down in moments. You may start your landing." General Veers, Star Wars: The Empire Strikes Back

Imperial walkers march across the frozen wastelands of Hoth, and the Rebel Alliance and its allies prepare to defend themselves in Assault on Echo Base, the fourth Force Pack in The Hoth Cycle for Star Wars: The Card Game! Will the Rebel shields hold against the Imperial onslaught? Will the Rebel defense of Hoth buy enough time for light side forces elsewhere to gather recruits and spread hope throughout the galaxy? Or will General Veers lead the Empire's walkers and troopers to a commanding victory while bounty hunters and Black Sun mercenaries chase down the remnants of the light side resistance?
Assault on Echo Base adds complete playsets of six new objective sets to Star Wars: The Card Game, opening up all-new strategies based around Walkers, Troopers, Droids, manipulating shield tokens, and removing damage from objectives. Meanwhile, two new objective sets feature powerful effects that trigger while their objectives are undamaged, encouraging players to center their strikes and defenses around them.
This is not a stand-alone deck. A Star Wars: The Card Game Core Set is required to play.
×

Assault on Black Reach The Novel

The companion novel to the Warhammer 40,000 boxed game Assault on Black Reach tells the story of how

Gamewright Sushi Go Card Game Pass the Sushi! In this fast playing card game, the goal is to grab th

Release Date Friday May 7th 2021  “Darkness, the canvas of the universe. Light, the brushstroke of c

First 100 Matching Card Game - Assorted Based on the First 100 brand, a wildly popular book series b

The 41st Millennium is a dark and sinister setting, riven by endless struggles between warring facti

Battle Academy Board Game   https://www.youtube.com/watch?v=j2_-4Mc9gU4 Join the Pokémon Trainers at