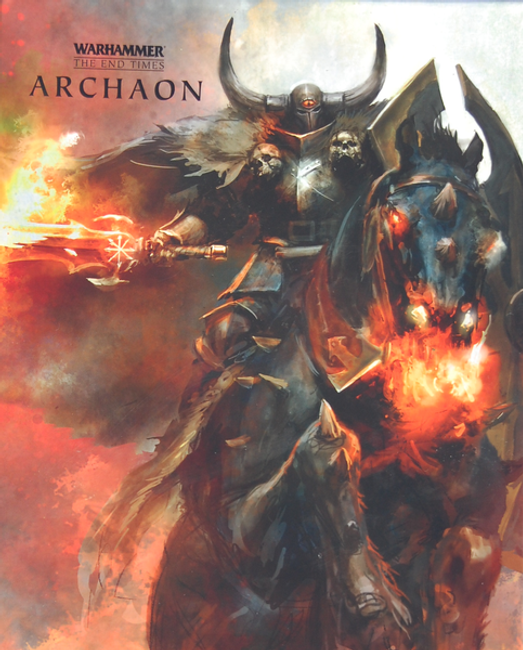 The Old World lies in ruins, crushed beneath the numberless legions of Archaon the Everchosen and his ratmen allies. Though all seems lost, the embattled survivors cling on to a glimmer of hope that, should their courage hold, there may still be a chance to thwart the machinations of the Chaos Gods and avert the End Times.

Warhammer: Archaon is the fifth installment of the epic saga of The End Times and is described over two hardback books which are presented together in a sturdy slipcase.

Warhammer: Archaon Book 1 is a 256-page narrative book. Bear witness to the might of Archaon Everchosen and his hordes as they enter the battle that will decide the fate of the world.

Warhammer: Archaon Book 2 is an 80-page rules book that contains Armies of the End Times: new army selection rules to represent the desperate battles fought at the time that Archaon moves to crush the Warhammer world. There are also the Lords of Battle campaign rules and Halting the Apocalypse narrative campaign, 12 scenarios inspired by the narrative, and 9 Battlescrolls detailing armies and formations depicted in the story.

The Fall of Altdorf Book 2 of The End TimesWhen the worst happens and the Emperor is lost, it falls